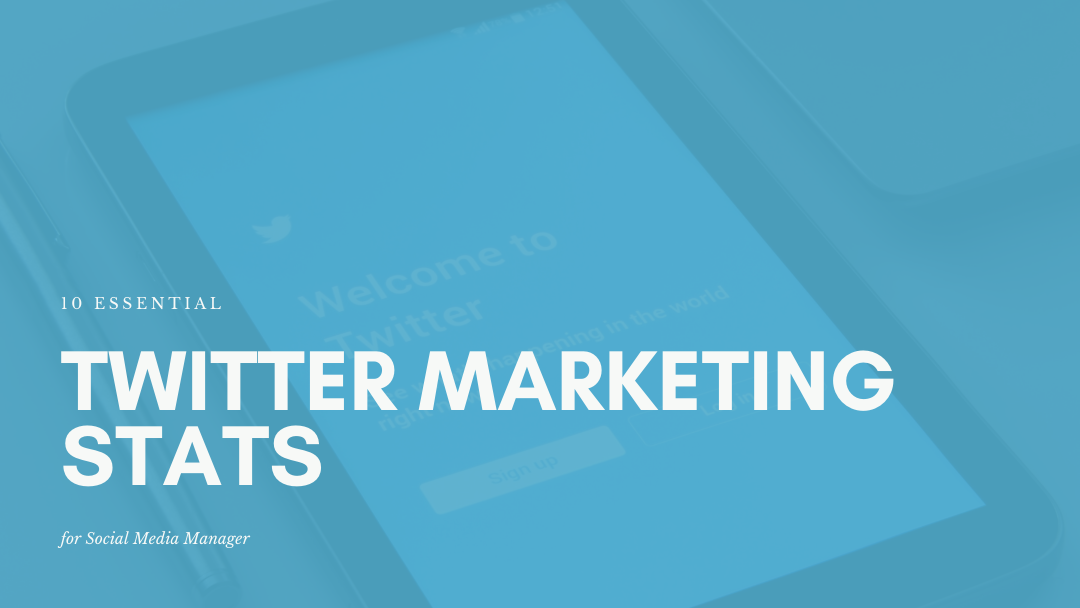 Stay ahead of the game with the most important and up-to-date Twitter marketing statistics for social media managers so that you can maximize your Twitter strategy and scale with ease. Today, social networks help people maintain their relationships and promote their business, views, grievances, or ideas. Whether it is pop culture, local or world news, jobs, or brands, Twitter is a powerful tool and search engine where you can find the latest information on almost any topic.

Companies enter the market on Twitter to attract new users and subscribers, increase brand awareness, conversion, and more. It creates a brotherhood of people with joint or related business industries and interests, conducting a business marketing campaign that goes far beyond maintaining personal relationships.

Twitter has changed immensely since its appearance in the social media world in 2006. Today, it is among the leading social networks worldwide and a popular marketing channel. And we have stats to prove it!

1. Advertisers could reach 436.4 million users on Twitter in October 2021 (DataReportal).

The success of each Internet project can be measured by its target audience. And, most likely, it is the first question that arises for a person intending to promote the brand on Twitter: how many people use this social network?

Marketers could reach 436.4 million users on Twitter in October 2021. Still, data published in the company’s recent investor earnings report shows that Twitter had a total of 211 million monetizable daily active users worldwide. It is still quite difficult to predict whether this growth trend will be able to continue. And although we cannot compare the number of Twitter users with Facebook ones, there is no doubt that the reach of Twitter for any marketing campaign remains enormous.

While Instagram and Snapchat have won over the youngest users, Twitter has its audience to appeal to.

Distribution of Twitter users worldwide as of April 2021, by age group

As of April 2021, the Twitter global audience was composed of 38.5% of users aged between 25 and 34 years old. The second-largest age group demographic on the platform was represented by users aged between 35 and 49 years old, with a share of almost 21%. Users under 24 years old were nearly 24% worldwide, while users aged 50 or above accounted for roughly 17%.

Twitter is a place where people come to see and participate in a conversation about almost everything that happens in the world. So why not use Twitter ads to reach your target audience? Moreover, as per Twitter, people spend 26% more time viewing ads on Twitter than on other leading platforms.

The main advantage of promoting on Twitter is low competition. Since there are not as many ads on Twitter as we can observe on other social networks, users have less developed banner blindness. So, users are not overloaded (yet) with advertising and are pretty loyal to commercial content. Therefore, the probability that the ad will be noticed is higher.

Mobile devices have already become part of their owners. The current statistics prove that, so use this trend to your advantage. Creating personalized mobile marketing campaigns on Twitter will lead to positive results. Ensuring your Twitter ads look excellent on mobile devices should be a critical part of your strategy. Moreover, your tweets should lead to mobile-friendly websites. At another point, adapting the site to mobile devices will improve customer relations and ranking in search engines.

Today, mobile marketing embodies a simple and inexpensive way to reach the target audience using smartphones and tablets. So get the most of this tendency!

The popularity of Twitter is growing, and with it, the popularity of using hashtags is also increasing. Hashtags combine all the information related to a keyword from different users on Twitter into one tweet feed.

Take the creation/selection and use of hashtags seriously. Accounts that abuse them may fall under the Twitter filter, drop out of the internal search, and even be blocked. However, those who use Twitter hashtags effectively (and correctly) tend to see increased engagement on the platform, increased brand awareness, and increased customer feedback. Be honest in your posts and use hashtags to help categorize information, not manipulate or deceive.

6. 67% of B2B businesses use Twitter as a digital marketing tool (Statista).

Given the number of active Twitter users, this percentage should not be surprising. Brand messaging is no longer a simple one-way conversation where consumers are only listening. Now they can respond and interact with brands, their messages, and other consumers who also attract their attention.

Nevertheless, it is becoming increasingly crucial for businesses to be present on Twitter and be attractive and actively interact with users. Learn more about what Twitter conversations are currently in trend to know more about users’ moods. As a result, Twitter helps businesses connect with their customers in real-time and offers many benefits, including establishing the brand as a thought leader.

It is not a secret that today’s audiences eagerly consume videos. With video, they can discover your content, brand, and message. The fact that Twitter video is gaining momentum among brands, companies, and ordinary users means that you have a unique opportunity to test various techniques in this format and stand out among competitors.

Twitter’s recommendations for published video in 2022:

We know many examples when people stop using the company’s service or product due to unsatisfactory customer support. The study reveals that the more help, quick customer service, and support the brand provides, the more open the users are. And, it is evident. People want brands to be authentic, and they want actions, not words. Make sure providing help and support to your followers is included in your Twitter marketing strategy.

The audience of the microblogging network has frighteningly turned towards the male sex, whereas previously, it was gender-balanced. According to the survey, as of October 2021, almost 30% of Twitter audiences were female, and 70.4% were male.

While in terms of global gender demographics, Twitter is more prevalent among men than women, women are more likely to interact with brands on social networks than men. This is another interesting statistical fact that you should pay attention to when creating a marketing strategy on Twitter.

10. The average time spent on Twitter clocks in at 3.39 minutes per session (Statista).

Either way, Twitter is a popular platform to communicate breaking news in the form of tweets. This explains this short amount of time spent on the medium. Still, when it comes to time spent on Twitter, marketers should consider the best time to post on this specific platform to capitalize on a brand.

The above statistics clearly show that Twitter can become a unique platform for brands to communicate with the audience and promote businesses when used correctly.

On Twitter, unlike other social networks, tweets are displayed in a single feed in chronological order. Therefore, the main task here is to make sure that users notice your posts in this stream. Here are some tips to help achieve this.

With Twitter statistics above, this social media platform is a treasure trove of advertising opportunities. When you know who is using Twitter, how much they are using it, and how it is used, it is easier to shape the content to help, entertain, and engage the target audience. So keep these numbers in mind and represent your brand as one to follow, retweet, and buy from.

Subscribe to keep up with fresh news and exciting updates