Instagram’s Chronological Feed: What You Need to Know in 2022 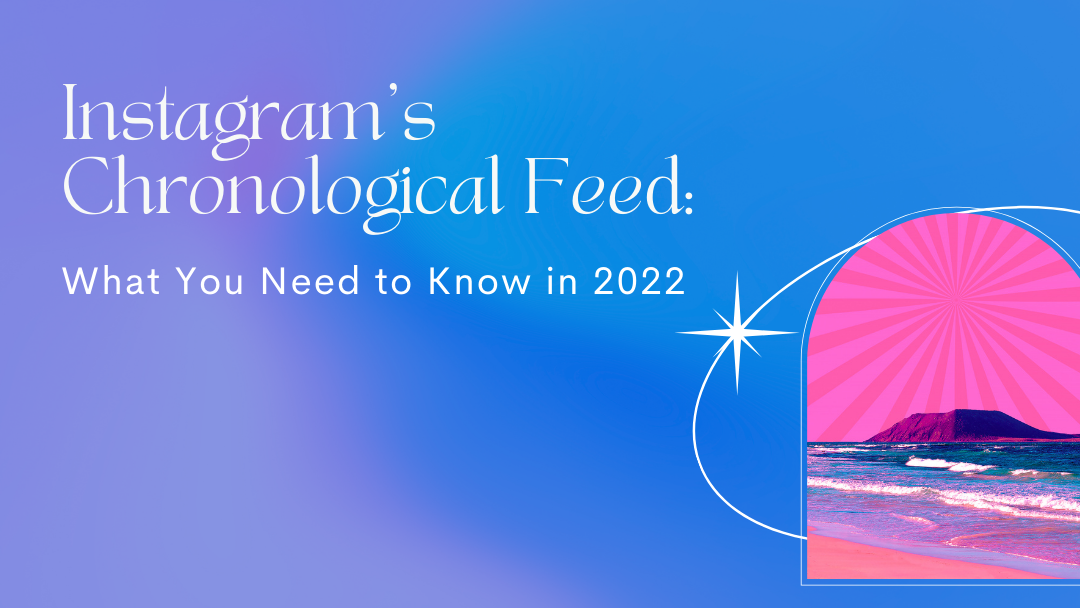 Instagrammers have begged the app to bring back the chronological Feed after a decision was made to move towards an engagement-based algorithm in 2016. Although an announcement was made of the return to Instagram’s chronological Feed, it will not be the same as the original version.

Many people have a lot of questions, and rightfully so! Our team has spent the past few days doing the research to provide you with everything you need to know. Here is what we will uncover in this article:

With that being said, let’s dive into what we found!

Instagram’s Chronological Feed: Not Available as a Default Setting

I’m sure you’ve heard by now that Instagram’s chronological feed is back, but there’s a catch. The biggest misconception with this announcement is that people think this will be the default setting when you open the app, which is not the case. The chronological Feed and newly announced favorite Feed will not be available to be set as a default – requiring users to manually select their desired feed display each time they log in to the app.

Instagram is standing strong in the belief that its algorithm-defined Feed boosts users engagement. This is how they have explained how its algorithm works:

“When we first launched in 2010, Instagram was a single stream of photos in chronological order. But as more people joined and more was shared, it became impossible for most people to see everything, let alone all the posts they cared about. By 2016, people were missing 70% of all their posts in Feed, including almost half of posts from their close connections. So we developed and introduced a Feed that ranked posts based on what you care about most.”

This is partially why Instagram is not allowing people a way to lock in the chronological or favorites Feed display as a permanent setting. Their engagement-based algorithm is supposed to improve time spent on the app and user satisfaction.

How will this update work on Instagram’s Feed?

There will be three viewing options that will be available:

The favorites Feed will consist of content from up to 50 accounts of your choosing — like your family, friends, or favorite creators. These posts will appear higher in your Home feed, giving them extra visibility when you’re scrolling.

How to influence Instagram’s algorithm-defined Feed:

Want to make sure your Instagram feed always looks its best? Join Vista Social to plan, preview and schedule your posts — for free!

Why Was the Chronological Feed Removed in the First Place?

As mentioned above, Instagram claims that people were missing 70% of all their posts in Feed with the chronological setting. The move towards an engagement-based algorithm would improve time spent in the app and user satisfaction.

However, this algorithm has been found to prioritize divisiveness, violence, and misinformation. Critics have claimed that the engagement-based algorithm has created a whirlwind of clickbait articles. Although, it’s important to note Meta has been rolling out new features to combat these problems.

It makes sense that an algorithm that prioritizes engagement would rank that content higher in the Feed because most people are arguing their viewpoints in the comments. Thus, resulting in a ton of engagement!

Since Instagram only made this announcement on March 23, 2022, there is little to no information available on what marketers can expect to see for engagement. Going off of only speculation and assumptions, there shouldn’t be anything to worry about for brands’ Instagram engagement.

Most of Instagram’s users are highly engaged and check in with the app regularly. In fact, 42% open the app multiple times within the same day. Since almost half of the people who use Instagram check it multiple times throughout the day, it’s unrealistic to think they will adjust their preference setting each time to the chronological or favorites Feed.

If however, this is what people end up doing, it will make it all the more important for marketers to know the best times to post on social media and to do so more frequently. A report by RivalIQ found that brands have increased their posting frequency on Facebook, Instagram, and Twitter in 2022. The median posting frequency across all industries increased about 25% this year on Instagram.

Why Can’t You See Your Posts In Chronological Order Yet?

Some people are claiming that they have not yet received the update to view posts in the new display options. There are a few workarounds so that you can receive the latest Instagram features and updates. Here is what you can do:

Instagram has a secret contact option for U.S. residents. Want to unlock this option? It’s super easy, just shake your phone! A pop-up will appear asking if something went wrong and if you’d like to report a problem.

However, like most Instagram updates that get rolled out slowly to a select few users, sometimes you just need to wait until it appears for you!

How To View Followers in Chronological Order?

Another feature that Instagrammers are requesting back is the ability to view followers in chronological order. In June of 2021, Instagram rolled out an algorithm that lists down Instagram followers in a random order.

The web version of Instagram use to allow people to see a profile’s following and followers chronologically, but now it seems to be a hit or miss whether it works.

Other people have claimed to use a third-party tool to see this information such as Snoopreport. Although there are benefits to seeing this information, we recommend using a simple and intuitive competitor analysis report.

This allows for more accurate benchmarking against your top competitors allowing your brand to uncover insights such as:

Subscribe to keep up with fresh news and exciting updates